In July 2019, the German Federal Court of Justice (BGH) ruled that Amazon’s advertising on Google using the branded term “Ortlieb” was a trademark infringement because the Google ad led to a list of results on Amazon that included competitors’ products. Some commentators and bloggers erroneously concluded that the German court was in effect banning brand bidding. Others downplayed the impact or didn’t fully understand the nuances of this decision.

We believe, however, that this ruling in Germany has implications for the rest of Europe. Many trademark laws hinge upon whether the use of the trademark “misled” or “confused” consumers. Whether or not something is confusing, of course, varies greatly on the specific consumer and the circumstances. This case, however, puts some parameters on what the German courts view as “misleading” and thus offers some guidance to brands.

Ortlieb I and Ortlieb II

To fully understand the meaning of this case, we need to take a step back. Ortlieb, the German bike bag manufacturer and Amazon, the global e-commerce giant, have been battling one another for years over trademark use. Ortlieb does not sell its goods directly through Amazon. But a search for “Ortlieb bicycle bags” on Amazon, shows plenty of Ortlieb bags, as well as bags made by competitors.

The fact that a branded search on Amazon results in a variety of manufacturer’s products is not considered a trademark infringement according to the German courts. In a case in 2018 dubbed “Ortlieb I,” the court ruled that Amazon was not infringing on Ortlieb’s trademark when a search on Amazon’s site for “Ortlieb” resulted in both Ortlieb and competitor products.

The reasoning was that consumers on Amazon’s site, a marketplace known to carry products from a plethora of brands, expect to see a variety of products, even when they do a branded search. Therefore, a consumer conducting a search for “Ortlieb bicycle bag” will not be confused and will be able to differentiate between the Ortlieb products and third-party products.

The screenshot below shows some of the products I found on Amazon when searching for “Ortlieb bike bag.” While most of the results were in fact Ortlieb bags, there were also some bags from Rhinowalk and other manufacturers. 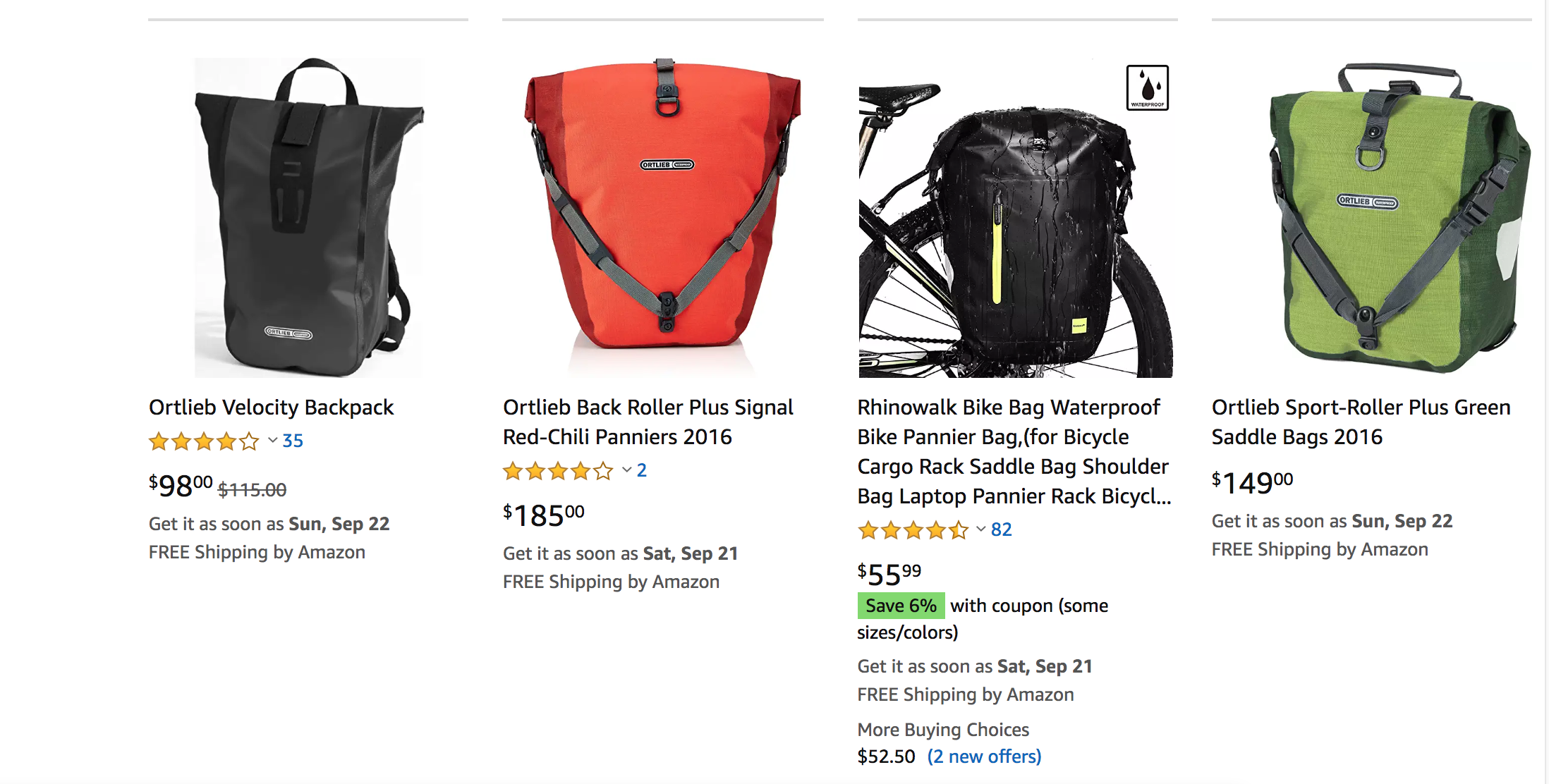 The details of the July 2019 case – Ortlieb II – however, were slightly different. In this case, Ortlieb accused Amazon of infringing on the Ortlieb trademark each time it placed ads through Google Ads on searches containing branded terms like “Ortlieb” that brought consumers to Amazon landing pages with Ortlieb’s competitor products alongside Ortlieb’s own products.

The court ruling includes the examples below. When the consumer searched on Google using the search terms “Ortlieb bicycle bag” or in German “Ortlieb Fahradtasche” they found this ad:

The link then took them to this page:

The first result on this Amazon page is an Ortlieb bicycle bag, the second result is a competitor, Vaude Aqua Bag.

The German High Court ruled that these types of results were confusing and misleading to consumers. When someone clicks on an ad titled “Ortlieb Fahradtasche” they expect to see Ortlieb bags, since that is what the wording of the ad indicates.

The main difference between the two cases is how the consumer arrives on the Amazon results pages that include many different products. The 2018 case addressed the situation where the consumer is already on Amazon conducting searches. The July 2019 case, however, focused on the consumer who conducts search queries via Google in an attempt to find places to buy the Ortlieb bag.

Ultimately, the German High Court decided that if a consumer searches for “ortlieb bicycle bag” and the url they click on says “ortlieb bicycle bag” then they should expect to only find what they searched for, otherwise it is confusing. Thus, when advertising on a search engine like Google, the line between advertisements and search query results must be clear.

For ad campaigns targeting the European Union and European Free Trade Association regions, the policy for trademarks in ad text and keywords applies. However, in response to a valid complaint in these regions, we will conduct a limited investigation as to whether a combination of keyword and ad featuring a trademark is confusing as to the origin of the advertised goods and services. If we find that the combination of keyword and ad is confusing, we will disapprove it.

The important word in this policy is the word “confusing.” We don’t think Google will reword the European policy because, as it stands, it allows for a fair amount of interpretation. Prior to the Ortlieb II ruling, however, we believe Google would not have taken down the types of ads described and shown above. Now, however, with the Ortlieb I and II cases concluded, both of which explored consumer expectations and what constitutes a misleading ad, we expect that Google will interpret their own policy differently. Whether this interpretation will extend to all European trademark takedown requests, or only requests involving ads showing in Germany, is difficult to predict.

In practice, this ruling means that brands who sell their goods in Germany will have greater control over how marketplaces like Amazon use their trademarks when advertising via Google. Marketplaces will no longer be able to use a brand’s trademarked term in paid search ads to entice consumers to click and then show them a range of competitor products. While this case only addresses one aspect of online advertising, it does set an important precedent for clarifying what types of advertisements confuse consumers. There may be more to come.