Another way that some affiliates seek to steal commissions from merchants is through the practice of typosquatting. Typosquatting takes on several forms but always involves the registration of a domain name very similar to the merchant’s trademarked domain and the use of that domain to make a profit off the merchant’s intended traffic. This section will look at how typosquatting causes merchants to pay out unnecessary commissions, specifically focusing on how affiliate marketers use these domain names. It will also discuss ways of countering these abusers.

Typosquatting is a subsection of the domain parking business wherein a person purchases domain names that are only a few letters off of a major business’s trademarked domain name. For example, domain names that might be bought for the purpose of typosquatting the site www.sample.com could be wwwsample.com, sampl.com, or sanple.com. The concept is predicated on the idea that users typing quickly into a URL field will often misspell a word, landing them at the typosquatter’s domain instead of the merchant’s domain. These kinds of users are particularly likely to convert as they were searching for the merchant— presumably to make a purchase—originally and have simply been diverted to the incorrect web address. Affiliate hijackers are able to turn these users into extremely profitable customers at the merchant’s expense.

The most common use for a typosquatted domain is to display pay-per-click advertisements. Many of these websites partner with the major ad platforms, such as Google Adsense for Domains, to sell ad space to advertisers and collect payment for those ads. Usually the top ad on a typosquatted site will be for the merchant’s trademarked site, i.e. the top ad on www. sampl.com would be for www.sample.com. Often, listed below the advertisement for the misspelled domain will be ads for competitors, www.example.com for instance. [besstbuy. jpg and/or homedepo.jpg] If the user clicks on the ad for the site to which they originally intended to navigate, the legitimate merchant ends up paying both the ad platform and the owner of the misspelled domain for what had truly been naturally driven traffic. 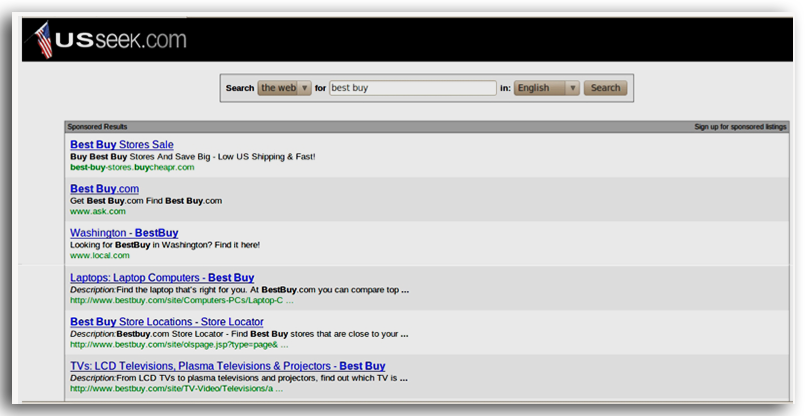 While the above kind of typosquatter is not usually a member of an affiliate program, affiliates have found several ways to use typosquatted domains to skim money from a merchant. A common, and fairly simple, technique is for an affiliate to set 301 redirects to the intended site on a typosquatted domain. During the redirect, they will set a cookie onto the user’s browser, claiming credit for a sale that was already going to be made. This technique forces a merchant to pay a commission on a sale that arrived organically. It also makes the affiliate seem to have a particularly high conversion rate as many people directed through the link were, in all probability, navigating to the merchant’s site with the intention of purchasing from them.

Finally, a typosquatter can target a merchant by using a typosquatted domain to redirect to a competitor’s site. Some typosquatted domains of popular sites automatically redirect the user to another, sometimes less popular, site that performs a similar service. Again, users typing in domain names, albeit, misspelling them, often intend to make a purchase. If they are redirected to a different, but not too different, site, they may end up making their purchase from them instead of the merchant they originally attempted to reach.

Beyond the basic financial consequences of typosquatters for a merchant, there are attending legal implications to allowing typosquatters into an affiliate program. Should a merchant wish to later file a claim that the typosquatted domain infringes on their trademark, under the language of the Uniform Domain-Name Dispute-Resolution Policy (UDRP) the merchant must prove that the typosquatter has no legitimate business interests in the domain. Some of the case law surrounding typo and cybersquatting, for example, Skype Limited v. Benjamin Decraene, suggests that allowing an affiliate who uses typosquatting into an affiliate program can authorize their claim to being a legitimate business. To cite that case, “The fact that an announcer expressly accepts – as in this case – that an affiliate becomes part of an affiliation program hyperlinking to the announcer’s website may, according to this Panel, be considered as an authorization/permission to use the Domain Name. The Complainant, by accepting the Respondent as an affiliate, could perhaps be regarded as having recognized the rights and/or legitimate interests of the Respondent in the Domain Name” (Skype v. Decraene). Because the trademarked merchant allowed the typosquatter to use that domain name as an affiliate in their program (even unknowingly), under the law they can be seen as having provided permission to the affiliate to do so. Should the case be interpreted in such a way, the merchant will probably never be able to retrieve the domain name, even though much trademark law would suggest it is rightfully theirs.

Countering typosquatting and its impacts begins with prevention. By self-registering misspellings of its domain name, a merchant can head-off typosquatters before they begin. Purchasing a wide variety of domain names similar to the trademarked one and setting these sites up to auto-redirect to the correct site can potentially save you from paying large sums for unnecessary pay-per-click and affiliate marketing.

The UDRP also provides a process for quick recovery of a domain if: 1) you can prove that the domain is similar enough to the trademark as to be confused by some users, 2) that the typosquatter has no legitimate interest in the name, and 3) that the name is being used in bad faith. Of course, pursuing action through these channels will be a potentially drawn-out process requiring a lawyer, so various domain recovery programs, most notably Alias Encoreand CitizenHawk do exist.

Both of these companies can actually participate in your affiliate program. They work to recover your domains, and instead of collecting an up front fee they receive commissions on all sales that pass through those pages for a set period of time--often one or two years.

Close relatives to typosquatting are the error traffic monetization schemes increasingly implemented by ISPs. Many ISPs intercept 404 Error pages or requests for non-existent domains, redirecting clients to other sites. Most commonly, the ISPs show a page filled with ads similar to those ads found on parked domains.

Recently, Paxfire, an ISP partner that manages this monetization system, began intercepting user searches and inserting affiliate links. A user would submit a search request for a brand like ‘Amazon’ to Google. Paxfire and their partner ISPs would intercept that request and send the user directly to Amazon’s home page through an affiliate link. They implemented this scheme across hundreds of affiliate programs in many networks.

Sendori is a domain monetization platform that allows advertisers to bid for visitors. Rather than bid to display ads on typosquatted domain names, advertisers bid for the visitors directly. For example, the domain tinyprint.com is part of the Sendori ad network. The winning advertiser sends visitors to any URL they choose. Naturally, some TinyPrints.com affiliates bid on that traffic and route it through a Sendori affiliate link. Not only do affiliates use Sendori, but they are also in many affiliate programs. In some instances, Sendori may send traffic directly through an affiliate link. Sendori is increasingly partnering with ISPs and providing error monetization systems as well.